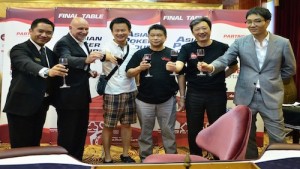 The main event for the 2013 APT Korea was held at the Ramada Casino in the Jeju Province of South Korea. The buy-in for this event was $2,700, and only 45 players took to the felt. The previous and first time this event had come to Jeju, the buy-in was only $1,000 and 166 players attended. Chan, who made his name via the World Series of Poker (WSOP) in Las Vegas, was the highest-profile player at the tables. Shen, on the other hand, was a relative unknown and a significant underdog heading into the event.

Chan is widely considered one of the best poker players in the world, so beating him heads up is no small feat. Shen also had to overcome some of the best poker pros in the region just to have that opportunity. What makes this accomplishment most impressive is that the 2013 APT Korea is only Shen’s second appearance in a major tournament. Furthermore, the China native entered the final table with just a 500-chip lead, which meant he had to withstand some intense pressure from his opponents in order to pull off the victory. That isn’t something inexperienced players are usually able to do.

The APT is relatively new, having been founded in 2006. Initially, it was relatively insignificant compared to the WSOP and the other tours, such as the World Poker Tour (WPT) and European Poker Tour (EPT). Online poker in Asia, however, is booming, and much like it did in the U.S. and Europe, that popularity is feeding the success of the tour. Just seven years ago, the notion of Johnny Chan attending was inconceivable, and now this great story puts the APT in the world spotlight.

What’s Next for Shen?

Poker tour main events often provide first-time winners with life-changing money. That wasn’t the case here, as Shen walked away with just $35,300. The reward hardly seems worth the risk, but Shen has gotten the attention of sponsors. He’s also a Chinese player, and there aren’t many Chinese players who’ve earned worldwide recognition. Shen will certainly need a big main event win to become a full-time player, but the good news is that he’s now going to get that opportunity many times over.